From the back cover: “Guitar Army is not a “prison book” or any other kind of book you’ve ever seen before — it stands by itself as an explosive demonstration of the high-energy rock and roll madness which has made the Motor City famous as a center of the emerging Rainbow Nation. PLAY THIS BOOK AS LOUD AS YOU CAN!“

This is the saga of the former “rock & roll guerrillas,” the MC5, who were managed by Sinclair until his imprisonment in July 1969. No one played a more important role in the in the Detroit / MC5 / Stooges canon than Sinclair. That much is certain. If you haven’t, check out the documentary “Danny Says” (one of my favorite parts in the doc is when Sinclair talks about signing, on the same day, the MC5 and The Stooges to Elektra records (for $25,000 — $20,000 to the MC5 and $5,000 to The Stooges)). The book is a series of documents and underground newspaper columns from the era of the White Panther Party and its successor, the Rainbow People’s Party. It’s an analyses and postulation regarding the emergence and development of what the author called “the rainbow culture”. And it contains over 100 photographs, posters, cartoons and other graphic documents of the rainbow rock and roll revolution — all printed on multi-colored pages throughout. It was designed and by the “Rainbow People Party” artist Gary Grimshaw and “made by hand in Ann Arbor, Michigan”.

If you’re a fan of the MC5, then you’ve probably heard of Guitar Army. John Sinclair chronicles the rise of the 1960s Detroit rock scene. It’s a fascinating look into how the Detroit scene changed America’s cultural landscape. The book is in wraps and near fine, unread condition — and is an absolute must-have for any fan of the 60’s underground / drug culture, the history of Detroit rock, the White Panther Party, “prison writing” or the MC5 .

Sinclair’s Guitar Army is an account of the Detroit rock scene from its earliest days. The story follows some of mighty influential musicians as they navigate their way through a remarkable moment in time.

Sinclair tells his story with an insider’s perspective on both the highs and lows. He covers everything from The Stooges’ early days playing dive bars to Bob Seger’s rise to FM radio fame. Sinclair recounts stories about legendary recording studios and takes us on a journey to capture moments that can only be experienced firsthand.

Guitar Army has become an iconic read for anyone interested in music history or who just wants to learn more about what it was like to be part of one of America’s most important scenes. This book captures the spirit and energy that made Detroit rock so influential and powerful during this era, making it essential reading.

Guitar Army has had a lasting influence on popular culture as well — it’s has been referenced in movies and mentioned as an inspiration by musicians like Jack White. It’s also celebrated for its honest portrayal of the 60’s counterculture.

Guitar Army is an essential read for anyone interested in music history or wanting to explore the world behind-the-scenes during this revolutionary period in American culture. Its an insightful narrative giving readers insight into why these musicians were so influential while also providing an great read! Whether you’re looking for a great read or you’re a collector, make sure to grab this copy! It’s tough to find one in better shape. 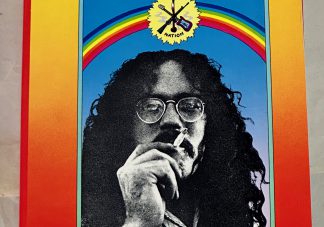 You're viewing: An unread copy of “Guitar Army” by John Sinclair beautiful first edition in wraps! $75.00
Add to cart