Elbert Hubbard, The Roycrofters – and The Philistine!

Only 1 left in stock

The Philistine: A Periodical of Protest. “Printed Every Little While for the Society of Philistines and Published by Them Monthly.”

From Elbert Hubbard’s Wiki page: “His best-known work came after he founded Roycroft, an Arts and Crafts community in East Aurora, New York in 1895. This grew from his private press which he had initiated in collaboration with his first wife Bertha Crawford Hubbard, the Roycroft Press, inspired by William Morris‘ Kelmscott Press.[6] Although called the “Roycroft Press” by latter-day collectors and print historians, the organization called itself “The Roycrofters” and “The Roycroft Shops”.[7]

Hubbard edited and published two magazines, The Philistine—A Periodical of Protest and The FRA–A Journal of Affirmation. The Philistine was bound in brown butcher paper and featuring largely satire and whimsy. (Hubbard himself quipped that the cover was butcher paper because: “There is meat inside.”[8] The Roycrofters produced handsome, if sometimes eccentric, books printed on handmade paper, and operated a fine bindery, a furniture shop, and shops producing modeled leather and hammered copper goods. They were a leading producer of Mission style products.

From Bruce White’s book Elbert Hubbard’s The Philistine: A Periodical of Protest, “The Philistine: A Periodical of Protest (1895-1915), the most successful of the American “little magazines,” was published monthly by the flamboyant businessman and radical, Elbert Hubbard. His magazine printed controversial poetry (including many of Stephen Crane’s “lines” for the first time) and progressive essays attacking militarism, the clergy and church dogma, and orthodox thought in general. Among other writers represented in The Philistine were George Ade, Claude Fayette Bragdon, Rudyard Kipling, Leo Tolstoy, and Eugene R. White. Hubbard’s acerbic observations over two decades regarding the establishment and the leading figures and periodicals of his time make his magazine valuable as primary source material for literary and cultural historians of his period.”

And I didn’t even mention the great adverts throughout all seven issues! 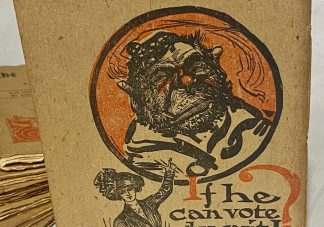 You're viewing: Elbert Hubbard, The Roycrofters – and The Philistine! $100.00
Add to cart