OFFERING: TOSH BERMAN. June 1, 2014. Los Angeles, CA: the synaesthesia press, 2015. Fine in wraps, as published.  One of 300 copies, letterpress printed and signed by the author.

the synaesthesia press is proud to announce the publication of June 1, 2014 by Tosh Berman. It’s a hand-made, limited-edition chapbook published in an edition of 300 copies in March 2015 .

I designed and letterpress printed June 1, 2014, by hand on my Vandercook OS 219, from both hand-set type and polymer plates. I bound the book by hand, too. Tosh signed the run. The book includes three tipped-in color illustrations. There are four variant covers (no specific limitation). I printed about the same number of each color: Steel Blue, Factory Green, Safety Orange, and Kraft Speckletone.

Around March of 1967, my father received a large envelope that was addressed from London. What came out was a black and white photograph and a letter, addressed to Wallace. It was a very formal business letter and it came from Brian Epstein, who I knew at the time was the manager of The Beatles.

Tosh’s father is Wallace Berman, “an American experimental filmmaker, assemblage and collage artist and a crucial figure in the history of post-war California art.” The letter was a formal request for Wallace to sign a release, allowing The Beatles to use his image on the cover of what would become arguably the greatest rock record of all time — Sgt. Pepper’s Lonely Hearts Club Band.

Tosh continues: My first impression was an image of a funeral, with all the people at the ceremony facing the camera. The image was in black and white, and the picture had a flatness to it, like nothing stands out, except the whole picture itself. Thinking back on it now, it reminds me of a Kabuki stage.  Remember, it’s the Spring of 1967 and only a handful of people had actually seen what would become the cover of Sgt. Pepper’s Lonely Hearts Club Band.

June 1, 2014 is a great vignette on its own. If you’re a Tosh fan or a Beatles fan or a fan of Wallace Berman, it’s essential reading. A variation of June 1, 2014 later showed up in Tosh’s book, Tosh: Growing Up in Wallace Berman’s World, which was published by City Lights Books in February 2019. It’s really a terrific memoir, and if you’re not an L.A. local, here’s another place to grab a copy.

Finally, June 1, 2014 first appeared as one of 365 posts Tosh shared on Facebook in 2014. That’s where I first read it. Tosh completed one vignette every day that year, and he’s now calling the collected writings the 2014 Series. As the title suggests, the vignette  was posted to Tosh’s FaceBook feed on June 1, 2014, which was also the 47th anniversary of Sgt. Pepper’s commercial release.

Some copies remain for sale at the publication price of $19.95.

You’re more than welcome to request one of the four colors. If they’re available, I’ll be happy to accommodate your request.

If you’re a bookseller, I’m offering generous discounts to the trade as well. E-mail me and I’ll hook ya up! 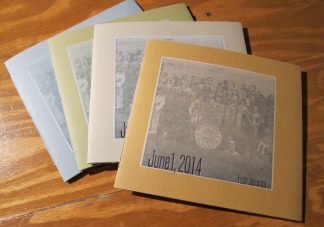